Nothing is as important as protein in your diet. Protein is the building block of your muscle and skin and plays an essential role in developing body tissues, enzymes and hormones.Most food contains some amount of protein in it. And so true protein deficiency is rare in developed countries. However, the chances of people being at risk cannot be eliminated which is why plant protein should be a part of your everyday life.

All kinds of deficiency lead to health problems. Protein deficiency, in particular, causes subtle changes in the body over a long period of time.

What is protein deficiency?

Protein deficiency is when your daily intake of food is unable to meet your body requirement.

An estimated one billion people in the world suffer from inadequate protein intake.

The problem seems to be more persistent in Central Africa and South Asia.

People from developed countries are also at risk. This includes people who have an improper diet, are hospitalized or older people in general.

Too little protein leads to changes in body composition, in the long run, known as muscle wasting.

An extreme form of protein deficiency is known as kwashiorkor. This is mostly observed in developing countries where children are subjected to famine and imbalanced diets.

Protein deficiency can affect all aspects of body functions. Some of these symptoms start showing up even when the deficiency is marginal and increase gradually along with some typical symptoms of kwashiorkor.

Let’s have a closer look at the symptoms of protein deficiency & why your body needs plant protein:

A protein deficiency takes a toll on the immune system.

The impaired immune function increases the risk of severe infections, a common symptom of protein deficiency.

A study in mice showed that when subjected to a diet of only 2% protein lead to more severe influenza infection, compared to a diet consisting of 18% protein.

Another study in older women showed that reducing intake of protein for nine weeks even marginally impaired immune function.

When your body can no longer produce enough of it, you could have brittle or thinning of hair, dry and flaky skin, and experience deep ridges on your fingernails.

However, these are symptoms of severe protein deficiency and unlikely to occur with minimal lack of protein in diet.

Muscles are the largest reservoir of protein.

When people aren’t getting enough proteins, their bodies tend to break down muscles to restore lost protein. This is not necessarily a good thing as losing muscles could also mean that they are holding onto their fat stores. And so their body composition would change in an adverse way.

Short supply of dietary protein can lead to muscle wasting over time. Even a moderate amount of protein deficiency is enough to cause muscle wasting in elderly people, which is why plant protein intake is so crucial at such stages.

4. Bone Fractures are a Greater Risk

Higher protein intake was linked to a 69% reduced risk in postmenopausal women.

5. Could lead to Fatty Liver

Another extreme form of protein deficiency can lead to fat accumulation in liver cells.

If left untreated, the condition may lead to fatty liver disease, causing liver scarring, inflammation and even liver failure.

A noticeable difference between normal people and those who suffer from protein deficiency is that people who are low on protein often find their cuts and scrapes take longer to heal.

Sprains and other exercise-related mishaps seem to have the same effect.

Protein is needed to make blood clot. When your body is unable to produce collagen, it could lead to such problems.

Research shows that only a week of not eating enough protein can start affecting your primary muscles responsible for movement and posture, especially if you’re 55 years or older.

Lack of sleep at night might also be due to protein deficiency. Research has shown that consuming a lower calorie diet with a high amount of protein improves sleep quality for middle-aged adults.

The reason for this is protein promotes tryptophan –an amino acid that helps in creating more serotonin hormone in the body responsible for regulating the sleep-wake cycle.

Inadequate protein intake makes your body restore your protein status by increasing your appetite for savoury foods, which tend to be high in protein.

While this might be helpful in times of food shortage, it seems counterproductive in today’s time when there is unlimited access to high-calorie and savoury foods.

Most of these convenience foods contain more calories and less protein. As a result, poor protein intake leads to weight gain and obesity, also known as the protein leverage hypothesis.

This is part of the reason why increased plant protein intake is believed to reduce overall calorie intake.

So if you’re feeling hungry all the time and have difficulty keeping your calorie intake in check, add some lean protein or vegan protein to every meal throughout the day.

You can also buy our Plant-based protein powder from Amazon here: 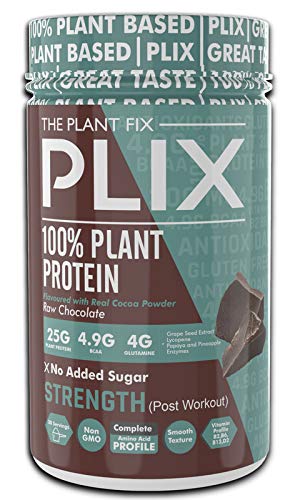 What are the Best Vegetarian Protein Sources?

How to Choose a Clean Plant Protein Powder?

Can I consume Plant Protein if I have IBS/ Lactose Intolerance?