Are you someone who likes gulping down a glass of Cola with your meal? Does the caffeine in Cola keep you active and refreshed?

Whatever your reason is, if you are an avid cola consumer – you must be aware that Cola is bad for you. You may not know the specific reasons – so here we are to give you not one but ten reasons Cola is bad for you, to prompt you to reduce your consumption of Cola today.

If you have been struggling to lose weight but have been occasionally enjoying a glass or two of cola, this may be the reason why. When you consume cola you are consuming large amounts of added sugar which induces large amounts of simple fructose in the body. A sugary drink does not make you feel full and therefore adds on to the number of calories you consume promoting weight gain in the body.

A major reason that the consumption of Cola is bad for you is that the large amounts of sugar present in Cola get converted into fat in the liver. A fatty liver is the beginning of a host of major health problems.

Consuming a high amount of fructose can cause a significant increase in the fast around your belly and the organs present there. This in turn increases the risks of developing Type-2 Diabetes and Heart Disease. This adverse effect of Cola is aesthetically and fundamentally detrimental to your health.

One of the adverse effects of drinking Cola is that it leads to weak bones. If you put an old tooth into a bottle of Cola, it will dissolve. This shows us that it has negative effects on our bones and in fact studies have linked it to cases of osteoporosis.

One health risk of Cola is that it leads to tooth decay. If you are experiencing cavities or weak and sensitive teeth, the reason can be an overconsumption of Cola.

Cola is a diuretic, which means it increases your blood sugar and causes frequent urination. It leads to the dehydration of cells which can make it difficult for your body to absorb adequate nutrients. 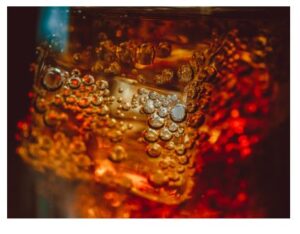 7. Cola can put you at a risk of cancer

The brown-black signature colour of cola is created using a chemical process when sugar reacts with sulfites and ammonia under a very high temperature, which can be carcinogenic which means cancer causing. One of the scariest health risks of consuming Cola is that it can increase the risk of developing cancer.

Insulin is a hormone that is present in our bodies which allows glucose to be processed by our body. By consuming sugary Cola daily, your cells become less sensitive to the effects of Insulin.

Another one of the negative effects of Cola on the body is that it can increase the risk of heart disease because of the high quantities of sugar present in the drink.

Have you ever found yourself having Cola after a while and suddenly craving it repeatedly? One of the biggest reasons Cola is so bad for you is because it is highly addictive. It causes a rush of dopamine because of the high levels of sugar present, which makes you feel good for a while but can affect your brain like a hard drug!

At Plix Life, we care about you and your health. Now that you know 10 reasons why Cola is bad for you, we hope you reduce your intake of Cola and switch to drinks which give you added benefits, nutrients and lead to a healthier lifestyle.

9 Benefits of Plix’s Green Elixir Effervescent on your Health

How To Curb Your Sugar Cravings?