The common cold is probably one of the most frequent infections affecting humans since the beginning of time. Even today the average population is known to get it several times per year.

You must have seen people reaching out to Vitamin C supplements, juices or drops at the very first sign of cold and flu symptoms. Let us see the effects of vitamin c for the cold

Early claims of Vitamin C been an effective treatment for common cold started somewhere around 1970, when Nobel Prize winner Linus Pauling conducted experiments to prove the viability of Vitamin C in curing a common cold that leads to its popularity.

Due to high public interest in the subject, he also published a book about cold prevention using mega doses of Vitamin C of around 18000 mg daily. However, the results of the experiments remained inconsistent.

Over the following decades, multiple controlled studies have not been able to come up with sufficient evidence to convince that Vitamin C could completely eliminate the risk of catching a cold.

However, regular intake of Vitamin C has been seen to significantly

In a 2007 study, after reviewing 60 years of clinical research it was found that Vitamin C supplements when taken after a cold starts, did not make the cold shorter or less severe. But when taken daily, shortened cold duration by 8% in adults and 14% in children.

The research further implied an average adult who suffered a cold for 12 days would probably suffer for 11 days if he happens to continue his doses of Vitamin C that year.

And for the average child, who suffered about 28 days of cold illness a year, would likely recover in 24 days if he continued taking high doses of Vitamin C.

Difference between Common Cold and Flu

The common cold and flu seem fairly similar at first. Both are indeed respiratory diseases that have similar symptoms. As a matter of fact, flu is more severe than the common cold and you are gradually able to differentiate between the two symptoms as your illness progresses.

Both cold and flu share few common symptoms such as

The distinction can be made on the basis of their severity. The common cold does not cause additional health problems whereas flu can lead to sinus and ear infection, pneumonia and sepsis. If uneasiness persists, your doctor might be able to get you a better idea by running a few tests.

Vitamin C is an essential nutrient that is to be consumed regularly to prevent deficiency. It is a potent antioxidant necessary to produce collagen in the skin.

Collagen is the most abundant protein found in the human body that keeps the skin and tissues healthy and flexible.

A deficiency in Vitamin C can lead to a condition known as scurvy, which is not that common in today’s time, as most people do manage to get enough Vitamin C from foods.

Most of the Vitamin C is usually concentrated in immune cells in the body and gets quickly depleted during an infection. Therefore deficiency of Vitamin C can significantly weaken the immune system and increase the risk of infections.

The most common risk factor for Vitamin C deficiency is known to be poor diet, smoking, alcoholism, anorexia, serious mental illness and dialysis.

Even though severe Vitamin C deficiency can take months to develop, there are few subtle signs that one should be wary about.

Collagen is a protein that is essential for keeping connective tissues like skin, hair, nails, bones and blood vessels healthy. Vitamin C plays an important role in the production of collagen.

Furthermore, low levels of Vitamin C can result in a skin condition called Keratosis Pilaris. This basically appears in the form of “chicken skin” on the back of the upper arms, thighs or buttocks due to the excessive build-up of keratin protein inside the pores.

This usually appears after three to five months of inadequate intake of vitamin C and resolves with supplementation.

Fatigue and poor mood are two of the earliest signs of Vitamin C deficiency.

Our bodies are capable of showing these symptoms much before a full-blown deficiency develops.

Even though they are the first to appear, they typically resolve within 24 hours of high-dose supplementation or within a few days.

Vitamin C and iron deficiency mostly happen to occur together.

Iron deficiency can usually show up in the form of paleness, fatigue, dry skin and hair, trouble breathing during exercise, headache and spoon-shaped fingernails.

If your anaemia seems to persist for too long without any obvious cause in sign, it might be a good idea to check your vitamin C levels.

4. Bleeding gums and loss of tooth

Without enough Vitamin C, gum tissues can get weak and inflamed and lead to more bleeding.

In advance stages, gums may start to appear purple eventually leading to teeth fall out due to unhealthy gums.

Spoon-shaped nails are concave shape nails that are thin and brittle.

They are generally associated with iron deficiency anaemia but are also linked to vitamin deficiency.

Vitamin C deficiency can seriously slow the rate of collagen formation, which in turn causes wounds to heal slowly.

Old wounds are likely to reopen due to the lack of Vitamin C and increase the risk of infection.

Vitamin C is an essential water-soluble antioxidant that prevents cellular damage by neutralizing free radicals that can cause inflammation in the body.

Excessive damage caused by cells can lead to oxidative stress that has been linked to many chronic illnesses like cardiovascular diseases and diabetes. Therefore, improving the daily intake of Vitamin C is highly essential.

Why go for Vitamin C Supplements?

The recommended daily intake of Vitamin C is 75 mg for women and 90 mg for men, which can safely go up to 500 mg for optimal absorption. Upper Limit for Vitamin C consumption has been touted to be 2000 mg, as doses higher than this can lead to diarrhoea.

Our bodies can’t produce Vitamin C on its own. Therefore, regular intake is needed for the proper functioning of our systems.

Excess quantity of Vitamin C is often drained out of our body as urine as this is a water-soluble nutrient. So consuming too much should not be a worry.

Vitamin C plays a vital role in performing many important bodily functions like helping WBCS in fighting off pathogens, reducing oxidative stress produced by cells, production of collagen – a key protein essential for healthy skin, nails and hair, relieve stress, proper healing, hydration and maintenance of skin and many more.

You can also get the benefits of Vitamin C tablets if you’re someone struggling to get it from natural sources or caught up in an erratic lifestyle.

PLIX Vitamin C Immune Booster is a quick and effervescent formula that is easy and refreshing to consume. It readily keeps you energized and active throughout the day, maintains healthy skin and supports your Immune System in myriad ways.

Infused with the goodness of 18 Oranges and 35 Lemons, PLIX Immune Booster is your shield against the Pandemic.

You can also buy our Vitamin C effervescent tablets from Amazon here: 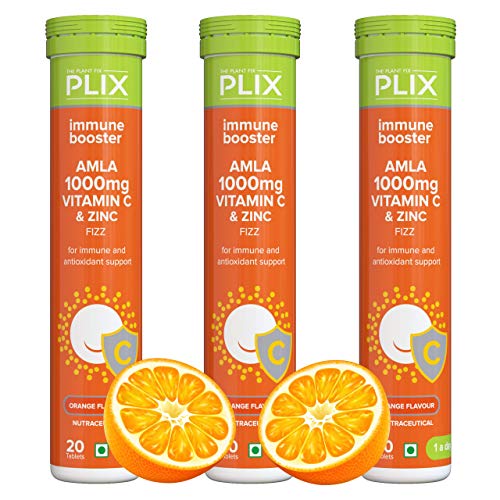 Why we need Vitamin C? Health Benefits of Vitamin C

Wonders Vitamin C Can Do For Your Skin